Kobe Bryant climbed to the free throw stripe with 32,291 points in his career last night.  The Black Mamba easily sank both free-throws and climbed up to 32,293 points.  With these buckets, Kobe passed Michael Jordan for the 3rd spot on the all time scoring list.


It took Bryant 19 seasons to record his milestone.  On the other hand, it only took Jordan 15 seasons to do so.  So, who really is better?

Although Kobe has more points, many would agree Jordan is ultimately the better player.  He came at a time when the game was old-fashioned, but made basketball a whole new sport.  He ended up transcending into a global superstar and spread basketball along with his own brand.

Bryant came at a time when Jordan had already changed the game; it was already athletic and cool.  He couldn't change the game the same way, instead the Black Mamba just proved himself.  Bryant fought to just get playing time early on in his career, and then molded himself into a star.  Throughout his career so far, he has made himself a name.  Kobe Bryant will be known along with the names of Michael Jordan, Bill Russell, Larry Bird, and Magic Johnson.


After the game Jordan reached out to Kobe to congratulate the Lakers star.  When asked what he said Jordan said, " He's obviously a great player, with a strong work ethic and has an equally strong passion for the game of basketball. I've enjoyed watching his game evolve over the years, and I look forward to seeing what he accomplishes next."
Nike revealed a new shoe last night, in honor of their signature athlete passing Jordan.  They are set to release a new colorway of the Kobe 9 that is mainly gray, with a purple bottom, and some green accents.  Below is the "Mamba Moment": 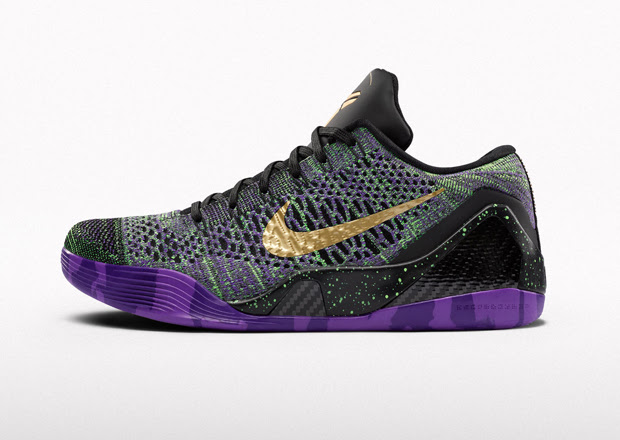 All in all, congrats to Kobe on accomplishing such a feat.  Kobe and Jordan will forever be two different players, and they will both be great in their own retrospect. Even Kobe himself knows Jordan is an all time great as seen in this great picture of the Black Mamba.

﻿
Posted by Buzzer Beater Basketball at 8:13 AM