The San Antonio Spurs' Kawhi Leonard has been named the NBA's Defensive Player of the Year.

Leonard was in a tight race for the award with Golden State's Draymond Green.  As it turns out Green tallied more first place votes (45) than Leonard (37), but the Spurs forward beat him out with second place votes.  Leonard had 41 votes compared to Green's 25.

Although some may think Green should have taken home the award, it's nice that Leonard did.  He is the first perimeter defender to win the award since Ron Artest in 2004.

This season Leonard averaged 5.9 defensive rebounds, and 0.8 blocks per game.  He also led the league in steals with 2.3 per game.  The Spurs' defensive motor is known for taking on the toughest matchup every night, which has helped lead to the Spurs success this season.


As seen in their 111-107 overtime win over the Clippers last night, Leonard made several plays that helped turn the games momentum.  He does both the small things, like rotating the right ways and playing good team defense, but also big things like blocking shots and grabbing steals.

After winning Finals MVP last year, Kawhi Leonard now has another trophy to add to his collection.  Now, he just needs to lead his team past the Los Angeles Clippers.  Right now the series is tied 1-1 and Leonard and the Spurs have momentum after their win last night.  Tune in on Friday night to watch the NBA's defensive player of the year try to pave the Spurs' road to the NBA Finals for the second year in a row. 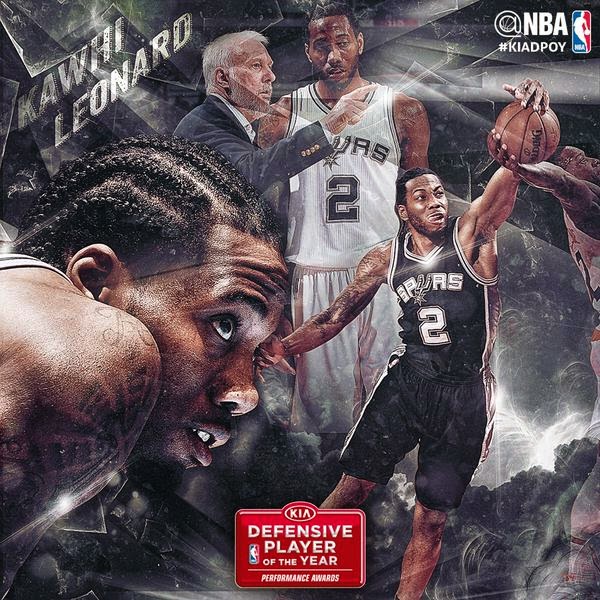 Posted by Buzzer Beater Basketball at 9:03 AM