Last month we announced that many NBA teams would be unveiling new uniforms for this upcoming season.  Some of them included the Bucks, Sixers and Clippers.

While two of the teams did a great job with improving the looks of their team, one of them did not do as well.  The Los Angeles Clippers unveiled not only new uniforms, but also a new logo.  The new logo is not only worse than the previous one, but so are the uniforms. The only thing that the Clippers did do right was create a funny video to go along with the unveiling.

After watching the video I fully understand why the logo is so ugly; Blake Griffin may have made it... maybe.  Although their new look is not the best, hopefully the new look can bring new results to L.A.  The other day they just acquired Lance Stephenson and getting ready for hopefully a deeper playoff run than this past season.

The Milwaukee Bucks also revealed their new uniforms recently.  Unlike the Clippers, the Bucks did a great job with giving their team a new look.  Not only has the Bucks look on the court improved, but so has their team over the past year.  The Bucks are no longer the laughing stock of the NBA, but rather an uprising, modern, and cool team.

While Los Angeles and Milwaukee made drastic changes, Philly decided to make nimble changes.  In the end their strategy may have worked the best.  The jerseys not only look cool to rock on the court but also off the court.  They give off a cool retro yet still modern look. 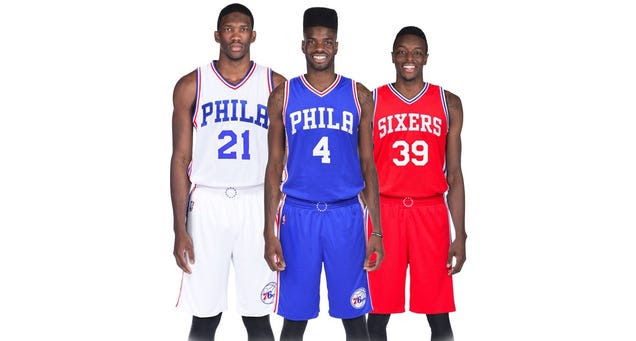 While Nike is set to take over the NBA uniforms in a few years, Adidas is starting to do a good job now.  A classic case of too little too late.  If you're a fan, make sure to buy some of these new jerseys in the next few years, because once Nike takes charge you may never see these uniforms again.
Posted by Buzzer Beater Basketball at 8:12 AM